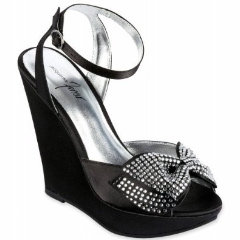 One night this spring, my daughter K. and I went shopping for the prom, and she shenpa‘d me in JCPenney’s shoe department. Twice. There were tons, verily, of customers yet only two salespeople who seemed to keep going on their dinner break. We must have been in there over an hour. I didn’t think the shoes K. wanted were so fabulous (though you may beg to differ, see picture) that we needed to wait that long, and my patience had long since begun to unravel. “Let’s go, already. There’s a whole mall full of shoes, K.! It’s silly to wait this long! We’ll find something great elsewhere!”

Okay, okay. It was like being told to “heel.” We ended up getting those shoes after all. Go figure. The “shenpa!‘ admonition really helped, though. I settled right down the second time. 😉  Of course, the real test of patience would have been if the shoes hadn’t fit after all that waiting.

When K. shenpas me (it’s not a verb, but I’ve made it one), my small-self—the voice of ego—almost always protests that the particular incident does not truly qualify for shenpa-ing. Small-self tries to show how the incident under examination is actually excluded from the “impatience” selection criteria because small-self does not like to be found out. That small-self is pretty laughable sometimes. So now, in addition to patience, I am learning how to submit and accept, something at which I am so not good! This ego wants full rein.

Because I want to make my struggles more apparent to my young shenpa partner, I told K. about my ego’s reaction, that is, not wanting to accept her shenpa warnings. She nodded and smiled at this. She then told me that at school she has a tendency to get irritated with people in her small groups who don’t do their work or do it in a way she doesn’t like, and she goes off on them. Since learning about shenpa, she said, she is catching herself before exploding at her fellow students, breathing, and letting the irritation go more often now. Need I tell you how satisfying it was for this mom to hear?